The actual surroundings of Xenaville Subdivision is a vast collection of various greens and trees, the calm and peaceful environment, and its close proximity to several thoroughfares that lead to major destinations. The city of Gen. Trias is home to several prominent universities and colleges from Metro Manila that put their branches in the city because of the growing population of highly skilled individuals and the increasing number of professionals.

The City of Gen. Trias is bounded on the north by Noveleta and Rosario; Tanza and Trece Martirez to the west; Amadeo in the south; the cities of Imus and Dasmariñas to the east; and Silang in the southeast. The city is only 35km southwest of Manila through different routes while the central business districts of Makati (30km away) and Taguig (28km) are only 55 and 48 minutes drive, respectively.

Among the numerous hospitals surrounding the Xenaville are some of the biggest in the entire Cavite province. These are the South Super Highway Medical Center, Gentri Doctors Medical Center, and the GenTri Medical Center & Hospital, Inc.

There are also numerous places of worship near the site, such as the Our Lady of Guadalupe Parish, Silang United Presbyterian Church, and the Iglesia Ni Cristo Lokal ng Buenavista.

Among the shopping and leisure centers that you can find within the city of Gen. Trias are the GenTri Public Market (one of the biggest in CALABARZON), the Walter Mart Gen. Trias, Robinsons Place Gen. Trias, Puregold Jr. Supermarket, SM City Dasma, V-Central Mall, Korean Grocery Store, and the Eagle Ridge Golf & Country Club.

XENAVILLE Subdivision is conveniently located  at Brgy. Santa Clara, General Trias, Cavite. Heard of General Trias? It is considered one of the bustling centers the CALABARZON as more and more huge industrial subdivisions are being built in this city, most of which are in the highland portion, specifically Manggahan along Governor’s Drive.

General Trias is a major industrial zone in this part of Cavite with such various major industrial estates such as Gateway Business Park, considered a world-class business community  and the New Cavite Industrial City whose main office is at  General Trias.  What’s more?  A portion of the Cavite Export Processing Zone lies in the same area --- this is where you will find about 110 operating factories – can you believe it?  Surely, there are enough job opportunities for you right here.  Others in this area include the Golden Gate Industrial Park, both in Phase I and Phase II.

There are a lot of good schools in General Trias and nearby major towns in Cavite, too. As homeowners of XENAVILLE Subdivision,  you need not worry of schools being far from your home.  Some of the schools include: Youngiji International School/College, Systems Technology Institute College, Ebenezro International College, Inc., AMA Computer College (and future AMA Computer University set to open in May 2019), Trece Martires City National High School, Cavite State University General Trias campus,  Colegio de San Francisco, Lyceum of the Philippines Cavite, De La Salle University Integrated School, FEU Cavite High School, Adventist University of the Philippines ( this university also offers Graduate School).  So there! Just choose which school would be the best option or your children. O nee for you to step out of the city, go to Metro Manila because good educational institutions are here in General Trias.

If you would need medical care,  there are good hospitals nearby like Metro South Hospital , General Trias Maternity and Pediatric Hospital, GenTri Doctors Medical Center, General Tri Medical Center and Hospital, Inc. and Mama Rachel’s Hospital of Mercy. There are also government health centers and private clinics all around the city to help residents with their health needs,

Going to churches for thanksgiving and prayers is not a concern either. There are many churches that are just a few minutes away from the subdivision. There are both Catholic and non-Catholic churches like: St. Francis of Assissi Parish, St. Vincent Ferrer Parish, Our Lady of Guadalupe Parish, Santiago Church, Annunciation Parish, Our Lady of Fatima Parish Church St. Teresa of Calcutta Church, Church of God General Trias West, Jesus is Lord Church-Manggahan, Holy Will United Methodist Church, Bible Baptist Church, Iglesia ni Kristo and San Francisco Presbyterian Church. Now, take you pick as churches abound in this part of the province of Cavite.

For some retail therapy, there are a number of malls and  shopping centers within the neighborhood’s vicinity or few minutes away, like: SM Molino, Robinsons Place General Trias, District Mall, Shopwise Imus,  City Mall Imus, Puregold Imus, SM Dasma and Walter Mart Governor’s Drive. More and more shopping centers are being built as the number of residential communities increase in this booming city. Expect more malls and shopping centers in the next 3 years!

The ladies of the house will never have problems in doing their regular trips to the wet market, too, because everything they need is here, too. There is also a public market in this part of Cavite at 20,000 square meters --- isn’t that wonderful?  They have a lot of healthy and fresh food choices. This is one of the top priorities too as feeding your family with good food makes these ladies happy and fulfilled.

For some recreation and leisure, the city has something to offer, too. One of the biggest and sprawling residential estates in the country covering 700 hectares - the Eagle Ridge development lies on the city’s South portion. The Eagle Ridge Golf and Country Club has three playable golf courses with two operational satellite clubhouses. Wow – that’s certainly great news for the golfers.

Other great things to look up to are the construction of the General Trias Auditorium and Sports Complex at the General Trias Memorial Elementary School’s grounds.  This city has also a city plaza, sports center and soon, a track and field and sports complex for everyone. Isn’t it nice to be living in a place where sports and recreation are also the local government’s priorities?

General Trias is highly accessible. This city is  accessible with the C6 Expressway connecting the North and South of Luzon and the Cavite to Laguna’s Expressway connecting CAVITEX to SLEX. Even from the South of Manila – there is the expansion of the LRT 1 from Baclaran to Dasmarinas City and this will provide the faster and convenient access from General Trias city to Makati City. So, those who are working in Makati City, BGC and neighboring cities need not worry, as soon, good public transport will be available. 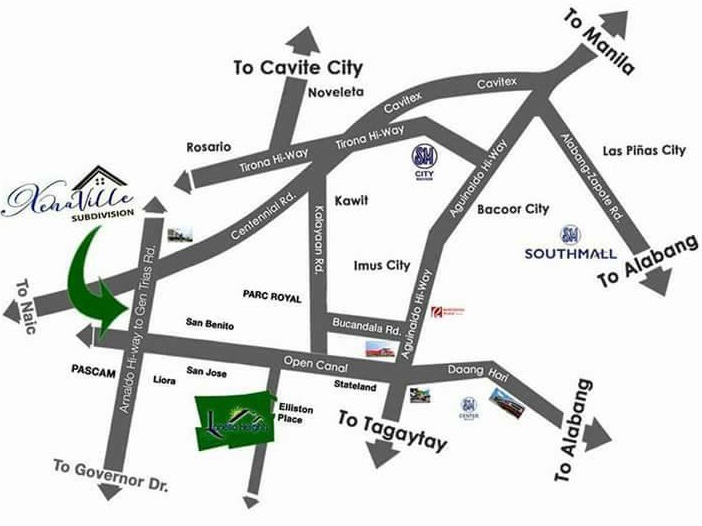